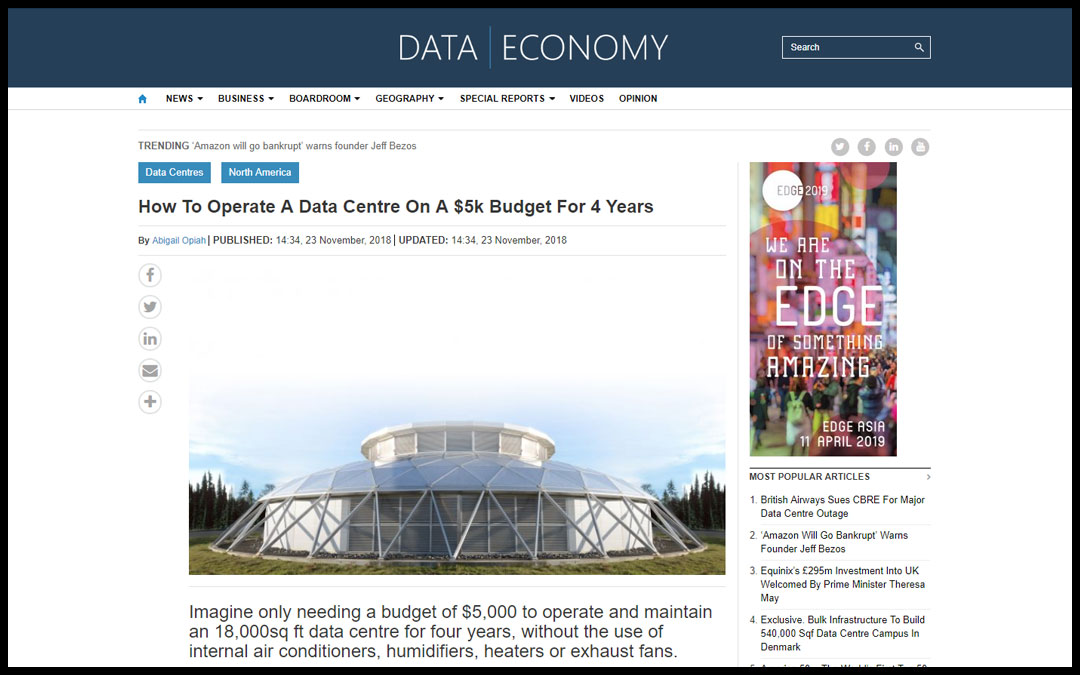 Imagine only needing a budget of $5,000 to operate and maintain an 18,000sq ft data centre for four years, without the use of internal air conditioners, humidifiers, heaters or exhaust fans.

Server Dome data centre have done just that with their geodesic dome-shaped data centre, that provides small footprint and is virtually maintenance free.

The dome data centre design, according to Server Dome, helps to reduce the required mechanical systems in the facility to just one—the Air Handling Units.

Brian Duke, VP Sales & Outreach at Server Dome told Data Economy: “The design of the dome is extremely efficient and only requires replacement of the filters and periodic inspection of the aluminum exterior structure”.

The current design uses 52U racks, but the design specifications can include 3,000 pound racks and up to 40KW per rack.

Server Dome projects a growing capacity plan for 15 years and a sustained capacity at that level into the future.

They also predict that the physical structure should have a lifespan of 30+ years, as power and cooling can be upgraded and/or replaced at any time without impacting the design or operations, according to Server Dome.

The data centre also uses less than 1,533 gallons of water a year, adding to a minimised maintenance cost, with a positive effect of having zero down time in nearly four years of operation.

The only technical barriers encountered with systems design, architecture, and deployment were regarding the owner/user “fear” associated with a radical new concept for data center design, according to Server Dome.

The strength of the design includes significant computational fluid dynamic modeling of the model and generation of supporting data to prove that the operational outcomes are valid.

The data centre is also vendor neutral, with nothing in the design or operation of the data centre that requires specific hardware, network or storage.

The company say they have a power usage effectiveness (PUE) rating as low as 1.06, that’s “34% better than any conventional centre”.