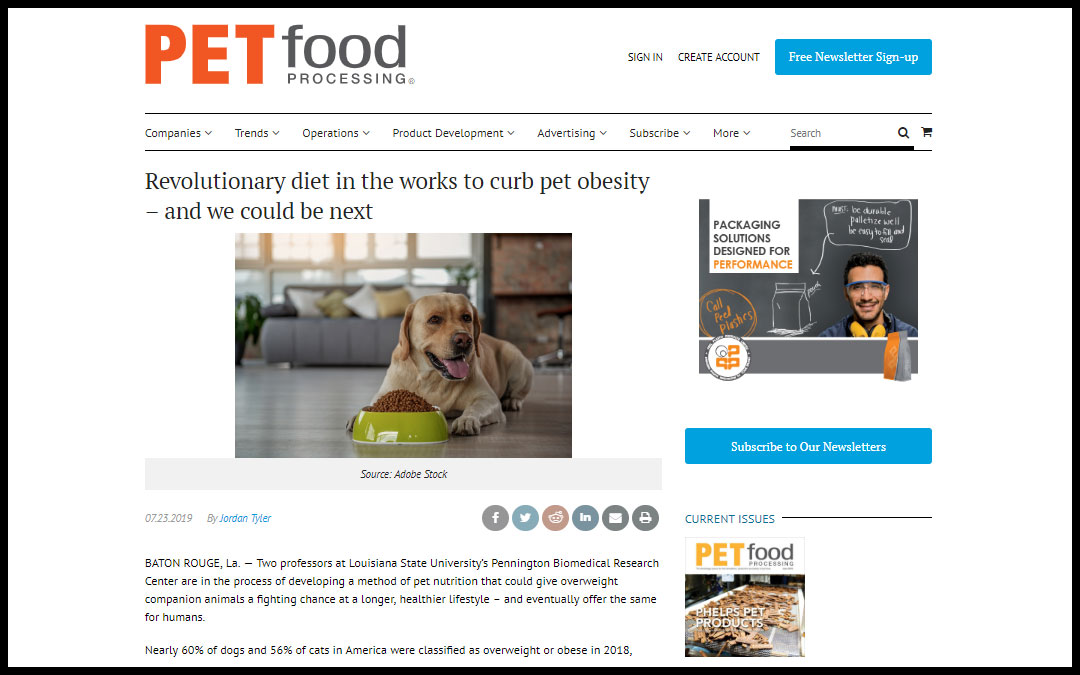 BATON ROUGE, La. — Two professors at Louisiana State University’s Pennington Biomedical Research Center are in the process of developing a method of pet nutrition that could give overweight companion animals a fighting chance at a longer, healthier lifestyle – and eventually offer the same for humans.

Nearly 60% of dogs and 56% of cats in America were classified as overweight or obese in 2018, according to the Association for Pet Obesity Prevention (APOP) 2018 Pet Obesity Survey. In this report, Dr. Ernie Ward, veterinarian and president of APOP, suggested veterinary professionals “need to offer more obesity treatment options than: Feed less and exercise more.”

Frank Greenway, MD, professor and chief medical officer of the clinical trials unit, and Tom Gettys, Ph.D., professor in the nutrient sensing and adipocyte signaling laboratory, see this as an opportunity.

Ten years later, the research group contacted Gettys to begin developing a method of therapeutic methionine restriction to be used in animal diets, and eventually human foods, that would allow them to increase their food intake while simultaneously losing weight and, therefore, reducing adipose tissue or body fat.

Gettys describes it as “a conundrum in itself,” and explains the complex metabolic reactions that result from restricting methionine levels to a specific degree.

“What we’ve established is that, in these animals, the liver perceived the shortfall of dietary methionine and activates a transcriptional program that increases a large number of genes, but very important among that group of genes that it activates is one called FGF21 [fibroblast growth factor 21],” Gettys said. From there, the hormone travels to the brain and essentially increases the rate of energy expenditure, which “prevents the animal from accumulating adiposity and body weight,” despite the fact that the animal’s appetite is increased and consumes more food, he explains.

As of July 2019, Greenway and Gettys are undertaking the formulation of methionine-depleted soy to incorporate into dog diets and administer in clinical tests. Once the initial lot of soy is perfected, the dog diets will be formulated by a third-party company with long-standing pet food industry ties.

Gettys said once the diets are formulated, clinical trials are expected to last for three to four months.

“We’ve not conducted any studies yet in dogs, but the fundamental biology of the regulation of hepatic expression of FGF21, we trust that it’s going to be the same,” Greenway added.

As for cat food applications, Gettys explained that because cats are intrinsically more vulnerable to metabolic diseases than dogs, there could be a “very ripe market” for this method, but the challenge would be to develop a methionine-restricted diet that is palatable enough to appeal to felines’ finicky nature.

“We’ve been told that dogs are opportunity eaters, that they are always ready to eat, but the cats tend to be a little bit more selective about what they want to eat,” Greenway commented.

Palatability and a lack of variety are the two biggest challenges when applying this method to human food, Greenway and Gettys explain. The method necessitates the manipulation of individual amino acids, which have a bitter and unappealing taste on their own, to achieve the appropriate methionine levels prevent the gain of body fat. Additionally, humans are not adept to eating the same meal exclusively, unlike companion animals.

The patent application, US #20160128363, has not been granted yet, but they are both confident in the science behind it and it’s practical health benefits.

“There’s every reason to believe that it’s going to be successful,” Greenway said.

Greenway did warn that the restriction of methionine is not a cure-all for obese animals, saying, “…the ideal application of this is in a therapeutic sense when you’re dealing with patients who have some manifestation of metabolic disease or in a dog that’s beginning to develop obesity. It might be a great preventative to prevent the dog from becoming obese instead of taking some massively obese pet and trying to turn back time.”

Another question is whether pet owners would adhere to this one diet for their pets or continue to treat them or feed them scraps from the table. The dietary restriction of methionine can be extremely effective, but only if the therapeutic food is the sole source of nutrition, Greenway explained.

Stay up to date on news about the pet food processing industry on our News page.