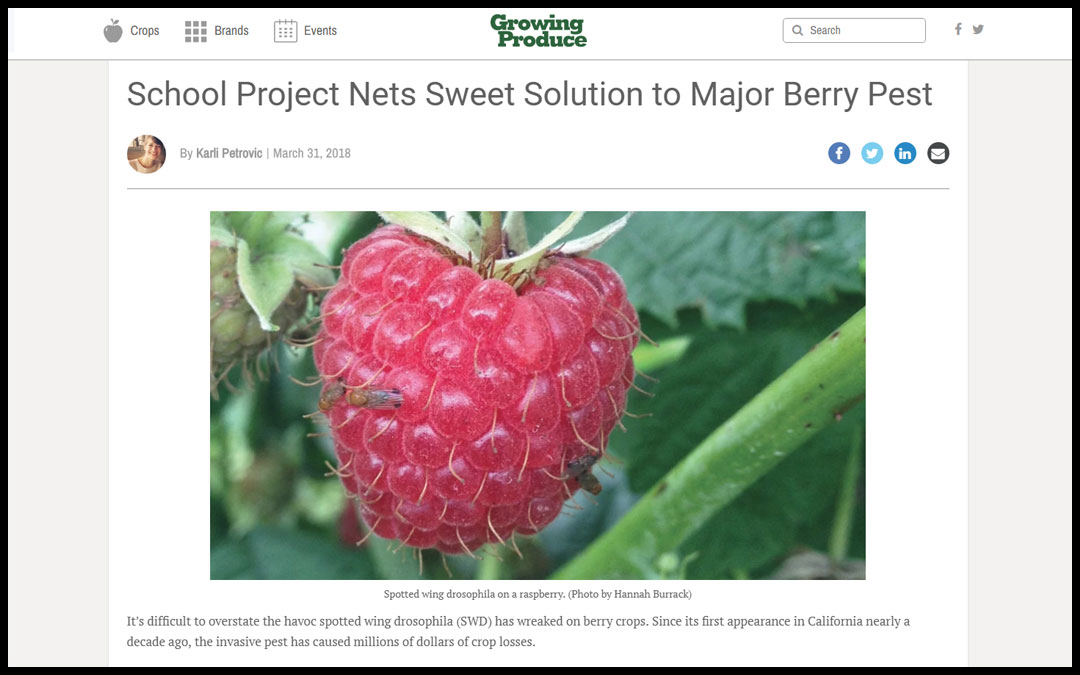 It’s difficult to overstate the havoc spotted wing drosophila (SWD) has wreaked on berry crops. Since its first appearance in California nearly a decade ago, the invasive pest has caused millions of dollars of crop losses.

While growers who produce soft-skinned fruits, like blueberries, raspberries, and blackberries, endure the greatest risk, the pest also threatens grapes, stone fruits, and other fruit crops. The problem seems to be getting worse.

“SWD is decimating the fruit crops in North America,” says Jason Pottinger, CEO of Academic Technology Ventures. “The pest lays its eggs in the fruit. The eggs hatch, the larvae grows, and you can’t sell the fruit. If there’s even one in a crate of berries, the whole crate is garbage.”

The bigger issue is that there’s little organic growers can do to protect their crops. While certain products can minimize the damage, Pottinger explains, “there’s a dire need for another effective insecticide in the mix.”

A Happy Accident
A new solution is on the horizon, and it couldn’t have come from a more unlikely source: a middle school science fair project. Drexel University’s Dr. Daniel Marenda’s son wanted to test the effects of sugar substitutes on Drosophila melanogaster (lab fruit flies). His findings — that Truvia brand sweetener was toxic to the flies — led researchers down an exciting path.
Marenda partnered a with Drexel University colleague, Professor Sean O’Donnell, and the university’s Academic Technology Adventures to learn more. According to O’Donnell, Truvia’s active component is erythritol, a sweet alcohol, that is safe for humans and pets. A follow-up experiment proved Marenda’s son’s findings: Erythritol was toxic when ingested by fruit flies.

While no one is certain how the component works physiologically, researchers believe it might interfere with the pests’ internal water balance. The good news, O’Donnell says, is that insects consume the component readily.

“Erythritol had the added desirable effect of reducing egg laying by female Drosophila after they fed on it,” O’Donnell says. “Other studies, in our labs and other labs, have shown erythritol can kill a wide array of insect pests, including other species of fruit flies, mosquitoes, and fire ants. Field studies further suggested erythritol could be effective in fruit crop protection in the field.”

Because the sugar substitute is not toxic on contact and doesn’t repel pests, the researchers have been testing ways to deliver the unlikely insecticide so that SWD will consume it. O’Donnell says erythritol works when added to insect food.

Spraying erythritol solutions with soaps in the fields has been effective, and the researchers believe that putting the component in baits could enable growers to effectively target the pests. For now, most of the testing has been completed in the lab, but O’Donnell says the few field tests on berry crops have been successful.

“Our grower and research partners have been favorably impressed so far,” he says. “Erythritol has outperformed other SWD control chemicals in field trials.”

In the Field
In one field test on a blueberry farm in Wisconsin, the erythritol product almost eliminated SWD from the crop for the first three to four weeks of the trial. Pottinger describes the difference as “night and day.”Ultimately, SWD overtook the farm in the fourth and fifth weeks of the experiment. One expert believes a local food source may have dried up, causing SWD to flock to the blueberry farm and causing a “strength in numbers” effect the crop protection products couldn’t prevent. Those looking to bring erythritol products to the market, however, remain hopeful, arguing the initial results prove the insecticide produced positive results and has significant promise. Researchers are trying to get another trial off the ground in Texas to learn more.

The Next Steps
For growers eager to employ this new product, help is on the way. Academic Technology Ventures, a technology commercialization company that seeks out and licenses technologies from universities and government labs around the world, is helping to bring the insecticide to the masses.

Erythritol caught the firm’s attention because it’s all natural, found in everyday food products, safe for humans and pets, and has proven effective against a wide variety of insect species. American Technology Ventures is currently working on a proof of concept for erythritol-based insecticides, as well as seeking strategic partnerships to help bring it to market.

“There’s a significant need for less harmful insecticides,” Pottinger says. “There’s no shortage of environmental issues as a result of the different substances sprayed on farm fields.”

The product is already FDA-approved, but EPA will have its own process. Pottinger doesn’t expect any obstacles. He believes approval could come as soon as late 2018 or spring 2019. The final step is to get the product into the hands of farmers across North America and abroad, a goal that could save berry crops from mass destruction.

For those who depend on this crop for their livelihood, there’s nothing sweeter than that.